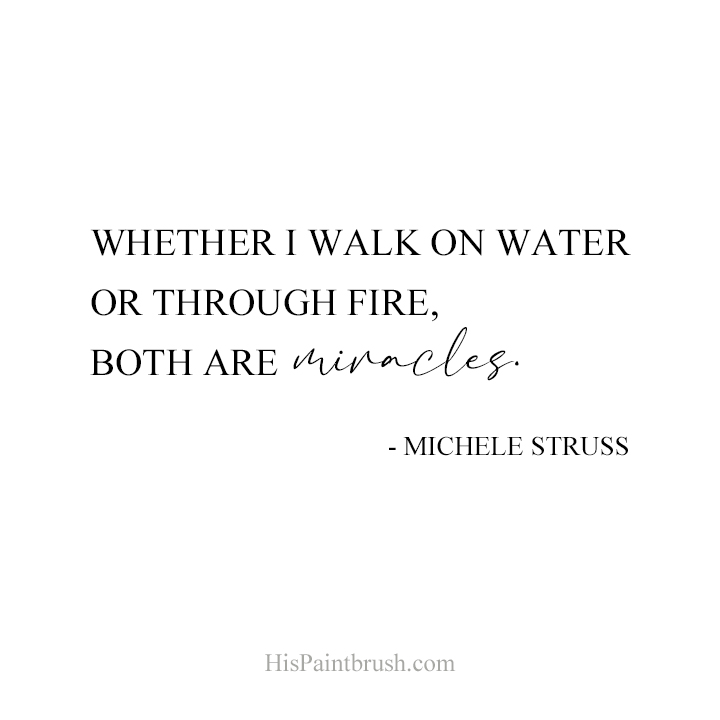 During one of my rereads of the story of Shadrach, Meshach and Abednego, the Lord showed me the miracle it is to walk through fire.  I think we can all agree that we would love to walk on water, but none of us would sign up to walk through fire; yet it seems that’s where we often find ourselves.  Digging a little deeper into this story though gives me a different perspective.

It is one of my favorite stories in the Bible for several reasons.  If you don’t know it well or it’s been a while, please, please read Daniel 3, it is such an inspiring story!  Can you imagine witnessing this one play out with your own eyes???  Furious King Nebuchadnezzar orders these three God-fearing men, who refuse to bow and worship any god but the God they serve, to be bound and thrown into a fire so hot that it killed his own soldiers!  Yet, as the king watched, a miracle played out before his eyes.  Daniel 3:24-25 says,

Then King Nebuchadnezzar leaped to his feet in amazement and asked his advisers, “Weren’t there three men that we tied up and threw into the fire?”  They replied, “Certainly, Your Majesty.”  He said, “Look! I see four men walking around in the fire, unbound and unharmed, and the fourth looks like a son of the gods.”

The king called Shadrach, Meshach and Abednego to come out of the furnace and verse 27 tells us, “…the satraps, prefects, governors and royal advisers crowded around them. They saw that the fire had not harmed their bodies, nor was a hair of their heads singed; their robes were not scorched, and there was no smell of fire on them.”  Come on!!!  That is the kind of supernatural, God-rescue I want in my story.  We all do, right?  But do we realize that for those men to have seen and experienced God’s presence and power as they did, they first had to experience the fire???

THE FIRE DIDN’T NEGATE GOD’S PRESENCE, IT REVEALED IT.

There seems to be a popular perspective that sees the absence of conflict = the presence of God.  Or let me say it another way, the presence of conflict = the absence of God.  Wow.  If we are following Jesus, that is just not true or biblical!  In Isaiah 43:2 the Lord said, “When you pass through the waters, I will be with you; and when you pass through the rivers, they will not sweep over you. When you walk through the fire, you will not be burned; the flames will not set you ablaze (emphasis mine).”  And a few verses down He said, “Do not be afraid, for I am with you (vs. 5)”.  As we stand in the middle of our own “furnaces”, may we be intentional to ask ourselves, “Where am I looking?”  The Bible makes it very clear that Shadrach, Meshach and Abednego’s eyes were not on the flames, but locked on God.

I think we tend to want to see God move IN our circumstances while He wants to move THROUGH them. In Daniel 3:28 Nebuchadnezzar said, “Praise be to the God of Shadrach, Meshach and Abednego, who has sent his angel and rescued his servants (emphasis mine)!”  Sometimes God enables us to walk on water.  Sometimes He gives us the opportunity to see Himself more fully and bring more glory to His name by walking through fire. Both are miracles.