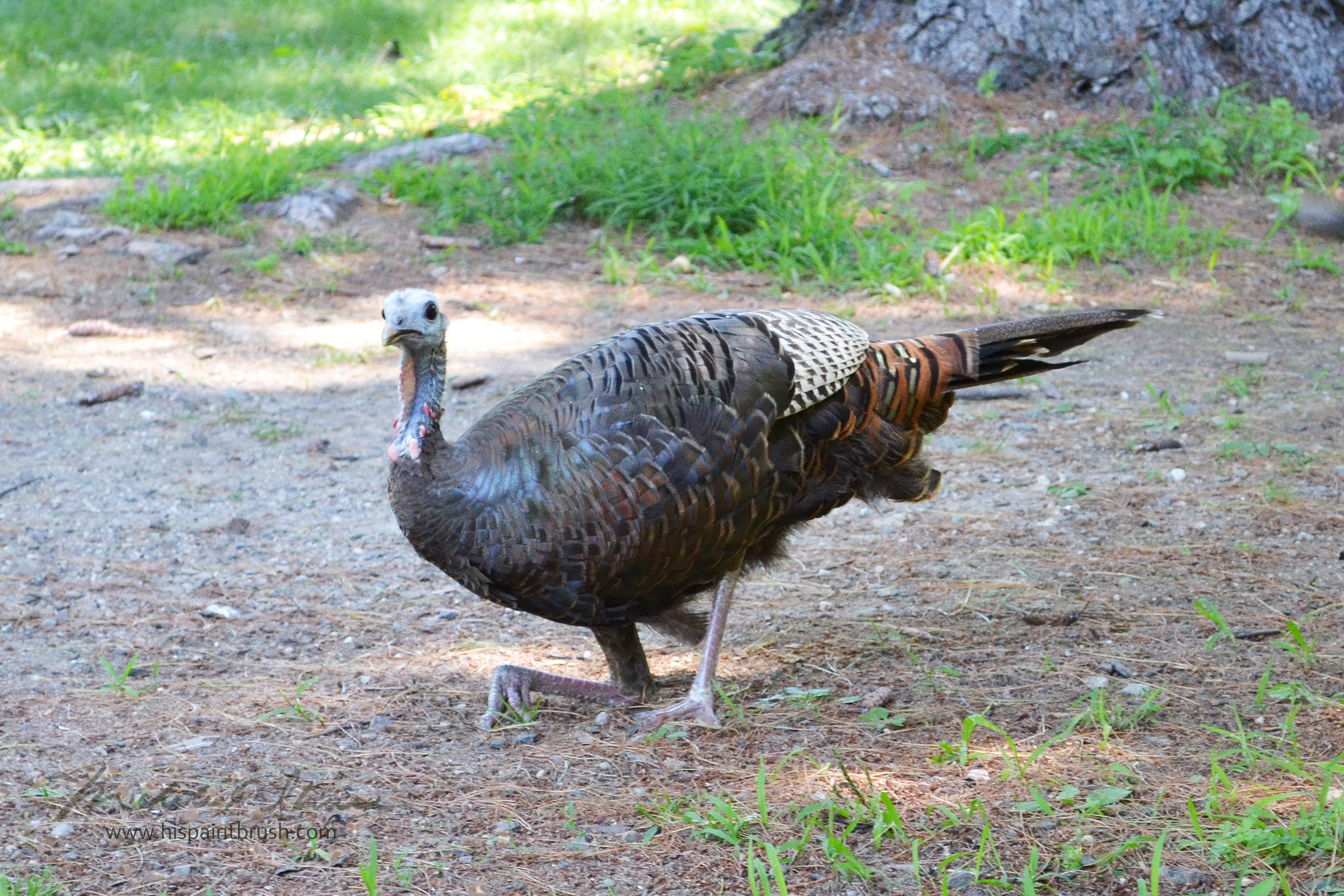 Hi All! I hope summer has been treating each of you well!! It’s been so long since I’ve reached out, so I thought I’d share with you my latest ponderings. I’ve told you before about the wild turkeys that grace our yard every day, but I haven’t told you about one in particular that we named “Fiona”. Ever since she started coming around last winter, Fiona appears to have a broken leg. She walks on her ‘elbow’, so walking is extremely challenging for her. The other turkeys accept her, but of course, go off without her all the time. She’s been hanging around more and more by us, yet no matter how many times I see her struggling, my heart breaks every time. I know, she’s a turkey; but I also know all too well what it is like for walking to be so difficult and to not be able to keep up with others.

One day I was watching Fiona walking around, struggling the whole time when all of a sudden she flapped her wings and flew onto the roof of my studio! I was so taken back. I guess I never thought about the fact that just because her leg was broken didn’t mean her wings were too! It reminds me that what sets us apart does not have to hold us back and label us as “unable”. I once heard it said, “Just because a blind person cannot drive doesn’t mean that they cannot reach the same destination.” So it is with you and me. Every one of us has “something” that we can hide behind and use as an excuse as to why we “can’t” do something; but is that the truth? Priscilla Shirer said, “What a shame it would be for the enemy to believe more about our potential than we do.” Ouch. Satan knows that the only way he can steal our potential is to convince us that we don’t have any. He wants us to retreat and forfeit our abilities, so he lies us into insecurity, lulls us into complacency and taunts us into fear.

In the Old Testament we read about Moses sending out 12 spies to explore the Promised Land. In Numbers 13:18 Moses told the spies, “See what the land is like and whether the people who live there are strong or weak, few or many.” After exploring the land for 40 days, most of them came back saying, “…the people who live there are powerful, and the cities are fortified and very large. … We can’t attack those people; they are stronger than we are. …All the people we saw there are of great size. … We seemed like grasshoppers in our own eyes, and we looked the same to them.” (Numbers 13:28, 31-33) However, in verse 30 Caleb said, “We should go up and take possession of the land, for we can certainly do it.” No doubt, the majority of the spies had their eyes on the giants in the land while Caleb had his eyes on their potential, with God in the equation. With that I ask you and myself, whose report are we believing today? The one that says we “can’t” or the One that says we can “fly”?

“If it’s important to you, you will find a way. If not, you’ll find an excuse.” – Ryan Blair