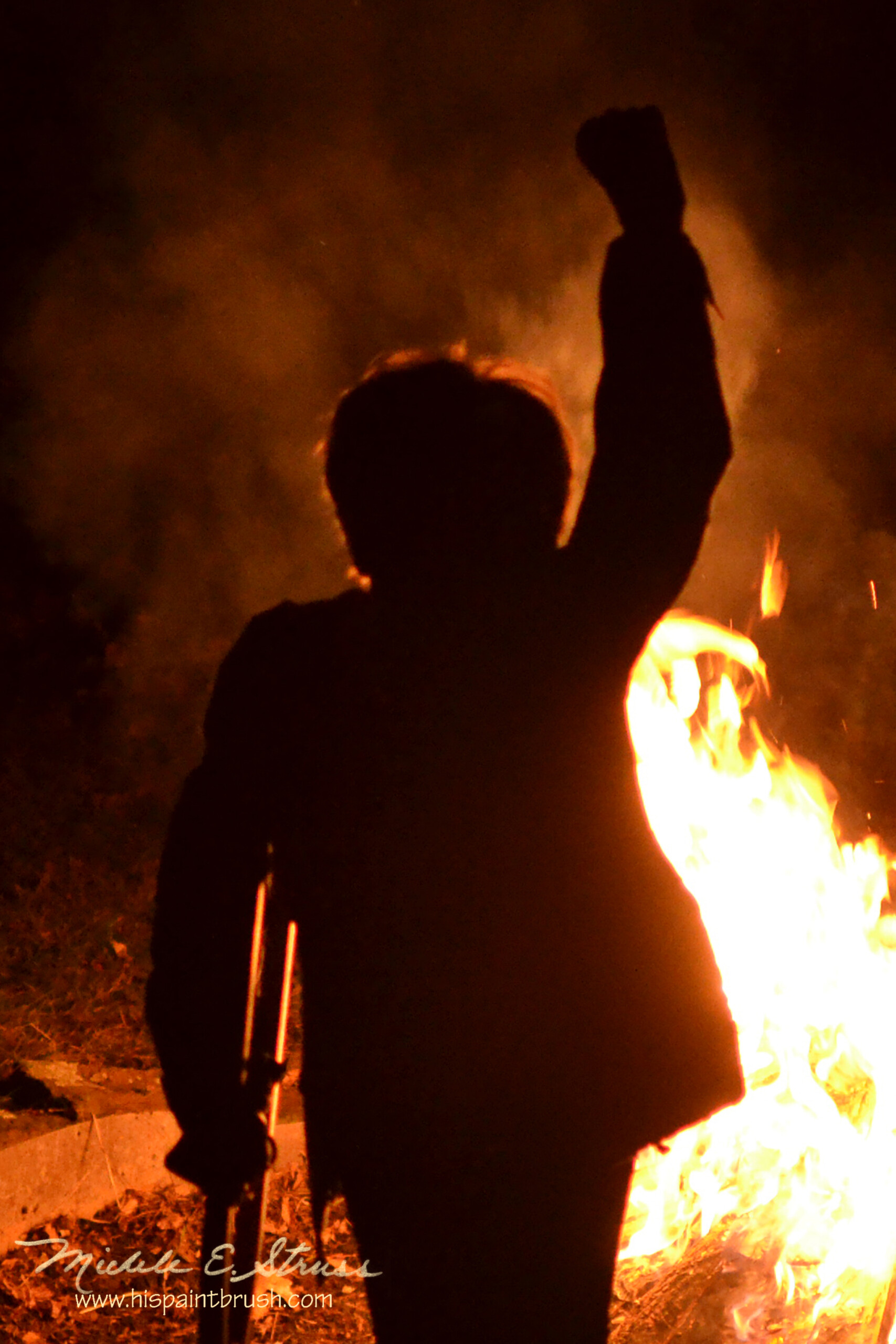 That is a quote by Shakespeare that hangs above my bed. I love how the Holy Spirit enables me to be just that, but I have to admit, sometimes I don’t feel fierce at all. Last week was one of those times. I had my 10 week post-op appointment with my doctor and was anxious the whole way there; not an excited anxious, a restless one. I didn’t know what my doctor would say and quite honestly, I didn’t know what I wanted him to say! As anxious as I was to move forward, I didn’t want to if I’d be risking the healing process. Well, from what he could see on the x-rays, the bone is continuing to heal well, so he did release me to SLOWLY begin bearing weight…2 weeks early!

After 10 weeks of not being able to walk and being anxious to get my active and dependent life back, wouldn’t you think I would have been ecstatic over my doctor’s report?!?! But rather than becoming filled with joy, I became filled with fear. My emotions were so entangled that I couldn’t figure anything out except that I was on the verge of tears. Things came to a head a little while later in the middle of Sears (yup!) when my dad questioned why I was not happier about the report I had just gotten (a very fair question mind you!). Out it all came spewing… “What if the bone is not healed AGAIN? What if I can’t walk? What if my legs are still uneven? What if standing is still difficult? What if…?” Being able to start bearing weight, I knew that the truth of all these things would be revealed…and I was scared to death of what that truth would be. Things did not go well after my surgery in March and the memory of it was all too fresh in my mind.

Two days later was Thanksgiving and as I was getting ready for our company I tried to stand for the first time at my vanity without crutches. Sadly, that same difficulty I had trying to stand after the surgery in March quickly returned as did a RUSH of discouragement. There are so many things I cannot do physically, but at least I used to be able to stand! But now it felt like that too was being taken and my heart was completely deflated. On top of it all, my body has paid a heavy price for all it went through this year. It has never been so out of alignment. I stand in front of the mirror and feel so far from the beautiful woman God created.

Satan was just bombarding me with fear and discouragement. He had me right where he wanted me, focusing on the natural and what I can’t do rather than on God and what He has promised me. As a result, I had become anxious, weary and lifeless. UGH, I know better!!! Yet the enemy fights dirty and does everything he can to cause us to forget and doubt what God has spoken.

It was May of 2008, nine months after I had fallen and broken my pelvis which forced me back onto crutches after burning them seven years earlier. I had been to many doctors, all with empty answers for why walking had become so challenging for me once again. I was out in my studio when out of nowhere the Lord showed me a dark path that laid before me filled with pain, inability, a wheelchair, discouragement and empty answers. But right in front of me was a large cement roadblock with orange warning strips across the top that separated me from that dark road ahead. God immediately revealed to me that He was the roadblock that would keep me from going down that hopeless pathway.

With that vision came the revelation of His healing that was to come; but I have learned that just because we have a promise does not mean we will not have a fight. Look at the Israelites and their Promised Land. That land was filled with inhabitants and giants that they first had to fight and defeat before they could live in the fullness of God’s promise to them. So it is with me. Standing on my promised land are the inhabitants of fear, discouragement and inability.

Knowing how the enemy was attacking me last week and how weak I had become, my friend began battling for me through intercession, praying specifically for ‘strength’. Through divine intervention, the night after Thanksgiving I was playing “Fight Song” by Rachel Platten. The powerful lyrics inspired my spirit to rise up and begin taking back all the enemy had been stealing through fear and discouragement. Tears filled my eyes as I started to find myself again; find my faith again; and find my resolve again. It was an intense time as I was being transformed from the inside out.

I am not a fool; I know the fight is far from over. Every time I try to stand without my crutches or stand in front of the mirror I am back in the throes of battle. I cannot let my guard down simply because I’ve won one battle when there is a war yet to win. So, this is my ‘fight song’: I am choosing to believe God’s promise over what I see and feel. Even though the two surgeries this year had nothing to do with getting off crutches, I WILL walk without them again someday despite neurological damage and cut and damaged muscles. I rebuke defeat in the name of Jesus. I cancel Satan’s plans to attack me with fear and discouragement. I will shine in the beauty and strength God gave me. I will fight with praise to God, who trains my hands for war (Psalm 144:1). I have put on the full armor of God (Ephesians 6:10-17) so I will be able to stand my ground. I will rule in the midst of my enemies (Psalm 110:2). Satan does NOT get to win. I declare victory in Jesus’ name!!!

So, what ‘land’ has God promised you that you need to claim? Fighting is not for the faint of heart, but as God’s children, we have not been given a spirit of timidity, but of POWER (2 Timothy 1:7) and He has given us AUTHORITY to overcome the power of our enemy (Luke 10:19). LET ME HEAR YOUR FIGHT SONG!!!

For though we live in the world, we do not wage war as the world does. The weapons we fight with are not the weapons of the world. On the contrary, they have divine power to demolish strongholds. We demolish arguments and every pretension that sets itself up against the knowledge of God, and we take captive every thought to make it obedient to Christ. 2 Corinthians 10:3-5